Nice community and perfect weather today for sketching. This was done with fountain pen and watercolor. 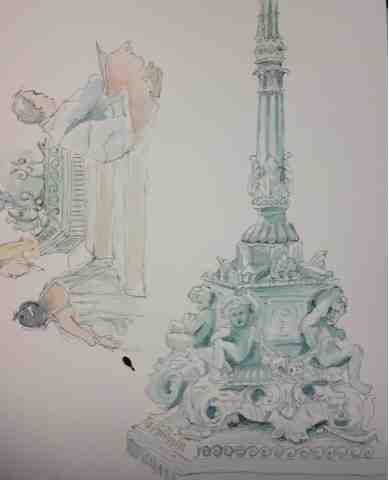 The strange but wonderful world of "Dartball"

I was introduced to the game of competitive "dartball" about 20 years ago through the Lutheran Church I once belonged to as a way to promote fellowship amongst the men of the church. The best fast-explanation of dartball (not to be confused with the Ben Stiller movie about the competitive game of DODGEball) I can give you is to say: "Imagine if you were to combine baseball with lawn darts or horseshoes or bowling and replace any presence of a ball with a pile of sharp 7" darts?" Then add to that two teams lined up along the 20' path to the dartboard who are constantly yelling things at you to distract your ability to throw with any kind of accuracy.

What dartball does not include (as one might expect or hope) is the presence of alcohol, swearing, mean-spirited attacks on an individual, crazy weather conditions (the game is played inside of a church basement mostly) or any female players. The tradition has been long held as a men's league through the church and maintains the established guidelines of so many men's recreational activities of their time (just as many golf courses have traditions where men and women have designated days where they can golf.) Ironically, no protective clothing for the men serving as umpires (standing on either side of the board and making judgement calls on whether the dart was "safe" or "out") exists either, which requires cat-like reflexes should an errant dart come your way.

My point is not to pick on the tradition as being outdated or in any way unconstitutional. But the fact remains that many of the men playing this game can either have a great night throwing darts at a board that looks like a baseball diamond or be so frustrated with their performance that they need psychiatric help before they go home to their families. This is where commiserating with other guys from your church help to put this all in perspective: it's just a silly game.

I recently sketched these as a way to recall the days of glory when I used to play, now that I am far removed from those feelings of inadequacy from many awful nights at bat. I can laugh about it now. This sketch was created with a Sharpie Fine Point pen, grey Prismacolors, and black Verithin pencil.

The graphic below helps to explain the architecture of the Dartball board and the equipment used.

Posted by Anonymous at 3:56 PM No comments: 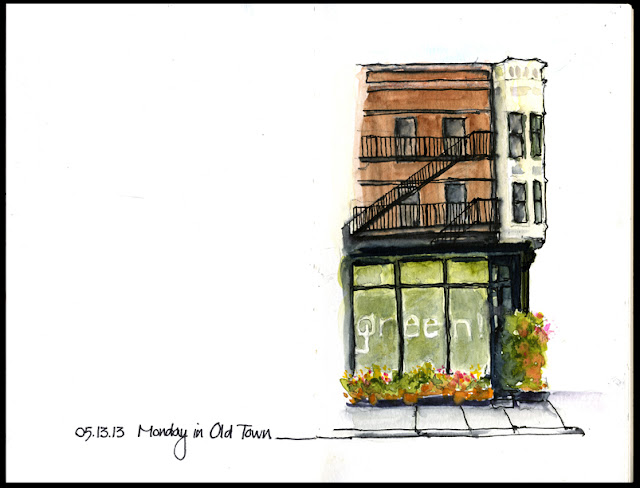 Old Town: The Monday sketch group met at Nookies in Old Town and then headed out into the cool 50° temperature to sketch. I love my Stillman & Birn Beta series sketchbook. It takes watercolor and ink nicely. I love using pencil in it too. By exerting a little discipline I steered clear of sketching people and tried to expand my horizon by sketching buildings for a change – well, A building!

The name of this florist on Wells Street is Green and it's window expresses my feelings. I'm so glad to be seeing color banishing the gray Chicago winter.

Posted by BARBARA WEEKS at 5:33 PM No comments:

A few years ago, I decided that I am not that strong at sketching people's likeness and yet my friends were still coming up to me and asking me to paint a portrait of their child. What I discovered was that many of these kids were involved in activities (such as sports and band) where there was plenty of action to convey the child's personality. No longer did I need to show the likeness of the subject and yet everyone knew exactly who was portrayed in the picture. This also allowed me to loosen up my sketch style because I was now trying to capture the emotion of the moment, not the accuracy of a person's face. Sports are really helpful because identities are determined by the number on their jersey since most contact sports require some kind of helmet or head gear. These are a few examples of this looser style.

How does this relate to "Urban Sketching" you might ask? Urban Sketching is the activity of capturing a scene from an urban setting, whether that be architecture, nature (such as parks and forest preserves), people going about their lives (there is a whole list of urban activities that people can be caught doing that are just made for the urban sketcher), modes of transportation and any combination of all of these. Most of the sporting arenas where I have captured these activities have been on college campuses in the Chicagoland area. While these are predominantly studies of the human figure, they are definitely not static images.

All of these sketches were started as pencil roughs, followed by some kind of felt tip marker or brush pen. The only exception is the hockey scene which was painted in acrylics.

The hero of this shot is #24, Tyler Shanks

Master cooking class: student is on the right

Posted by Anonymous at 8:59 AM No comments: