On Sunday, March 19, about 30 participants in the Chicago chapter of the artist network Urban Sketchers visited Fermilab, located in west Chicagoland, and sketched their hearts out. They drew buildings, interiors and scenes of nature from the laboratory environment, capturing iconic Wilson Hall, restored prairie land and the popular bison herd on site.
Urban Sketchers holds monthly sketch crawls, as they’re called. Their mission is to “show the world, one drawing at a time.”
The sketch crawl was organized by Peggy Condon and Wes Douglas from Urban Sketchers Chicago along with Fermilab Art Gallery curator Georgia Schwender.
You can see more paintings and drawings from Urban Sketchers Chicago on their Facebook page.
Check out their Fermilab sketches below. To see the full drawings and paintings, click on the magnifying glass icon in the lower right corner. Impressions from the artists are included in the captions.

Mary Jo Ernst
We had to make the Bison stop. Have never sketched them before. Just like cows–constantly moving. They have such an odd anatomy.


This location was a nice change of pace for me, offering really interesting views and very unique architecture. I had no previous knowledge of this place so it was an adventure!

Thanks Fermi National Accelerator Laboratory for such a warm welcome! Thank you to Wes Douglas Peggy Condon and Georgia for organizing. It was worth the roadtrip!

Lynne Fairchild
I had a wonderful time at our Sketchcrawl at Fermilab today. Thanks to everyone for organizing it, and to all who attended.

This sketch is, of course, the atrium at Wilson Hall.
I loved sketching in this light-filled space.

I was very inspired by Fermilab's strong commitment to the arts. I didn't expect this for a world-renowned scientific research institution. I really appreciated that they found so
many ways to honor the arts and culture: the art gallery, lecture series, the awe-inspiring sculptures on the campus, and the design of Wilson Hall (especially the beauty of
the atrium).

Thank you Fermilab for your hospitality and to Georgia for her warm reception to our group.

Harold Goldfus
It was great to finally be able to get to a sketch crawl. I did several drawings. This one of the atrium at Fermi Lab's Wilson Hall is my favorite and it was the most challenging in terms of perspective. I was able to get at it by treating the view as if I was doing a sci-fi paperback cover and abstracting a lot of the shapes. Not my usual figurative work, but it still felt to me like my style.

My first drawing at Fermi lab on Sunday was a warm-up sketch from the second floor balcony in Wilson Hall. I can see that I was already mulling over the more abstract approach that I used for drawing the atrium in the drawing I posted yesterday. I really enjoyed the aesthetics of Fermi Lab. For a place devoted to cutting edge physics, there were a lot of artistic touches I appreciated.

I regard myself as primarily a figurative artist. At the Urban Sketchers Chicago outing, I expected to sketch figures at Fermilab with hints of the environment in the background. Instead, I found myself taken with the architecture and aesthetics of the interior of Wilson Hall, and decided on a more unconventional approach.

I drew most of this kneeling in the corner which accounts for the unusual angle and perspective. Inspired by the covers of science fiction paperbacks I read in the 60's and 70's, I chose to abstract out a lot of the shapes and colors, which adds to the futuristic look of my picture.

Eileen Ferguson
I drove out west today to sketch at Fermilab. Some people sketched outdoors, but I enjoyed the view from the fifteenth floor.

Wes Douglas
I am "pleased as punch" that this location worked so well today. Our group tends to favor Chicago locations so I wasn't sure how many would show up to the suburb of Batavia today. I heard that around 44 or so of you did and that blew my mind. You guys rock and so doesPeggy Condon and Georgia Schwender for the idea.

Posted by Anonymous at 12:29 AM No comments:

Some people text or read, daydream, some meet with friends, while others eat or nap on the train. There is, however, a group of artists who sketch a wide range of passengers on various Metra routes. They represent a local group known as Urban Sketchers Chicago (USk Chicago) and they are part of a global community of artists that enjoy drawing on location in cities, towns, and villages in which they live, work, or have visited. Examples include but are not limited to cafes, street scenes, buildings, houses, shops, landscaping, people, domestic animals, transportation centers (i.e. airports, train stations and buses) as well as what you see while you are traveling.

Sketching people on public transportation is a favorite subject of these artists because they are always different and interesting. In our own way, Urban Sketchers are quietly doing our part to elevate the current Metra Rail “Ride Nice” campaign #metramanners. Who knows? Maybe the more smiles we can create with our sketches the less riders will be throwing digital jabs at one another about inappropriate behavior.

Urban Sketchers do not sketch from memory or photographs but by direct observation in person. This becomes particularly challenging because people on trains move around a lot. But it is also rewarding when those being sketched discover how their likeness is elevated to a fresh new perspective by these artists.

Wes Douglas remembered hearing one lucky passenger exclaim, “When someone snaps your photo on the train, it’s a little creepy. But when someone sketches you it is a relief.” These artists capture many different positions, colorful clothing and the expressions of commuters on paper.

Our urban sketchers are located all over the Chicagoland area and depend on public transportation for traveling between work and home as well as gatherings with fellow urban sketchers. And since a large portion of their day is spent on commuting, urban sketchers make the most of it by knocking out a few sketches to pass the time.

To learn more about Urban Sketchers Chicago and where they will be sketching next go to: https://www.facebook.com/groups/UrbanSketchersChicago/ 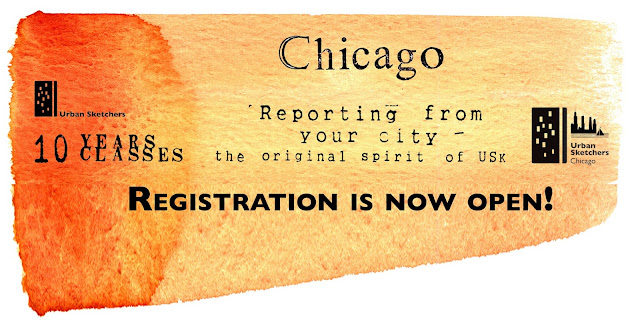 Posted by BARBARA WEEKS at 10:00 AM No comments:

Do You Know What's Happening on March 15? 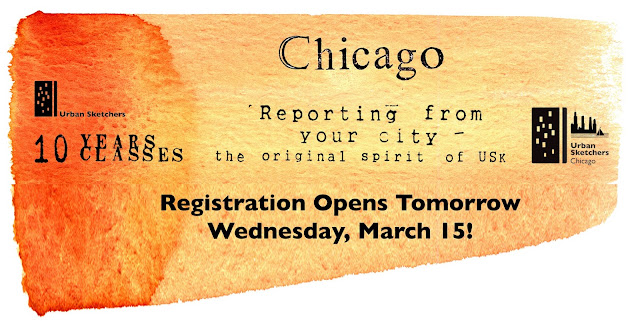 Whether you're telling a little story, a medium tale, or an epic in your sketches, add to your visual vocabulary with our 10 talented instructors in our "10Years 10 Classes" program. Sharpen your visual storytelling skills while you celebrate the 10th anniversary of Urban Sketchers.


You may register for one or more workshops. Workshops vary in cost. If you register for all 10 workshops, you will automatically receive a 10% discount. It will be applied to your final cost.


Workshops are held on 10 consecutive Saturdays, in various locations, beginning on April 15. Most are scheduled from 12 Noon to 3:00 p.m.  There is one 6-hour workshop that starts at 10:00 am.

Meet Our Next Group of Great Instructors


June 3,  "Sketching the World from Your Perspective"       Instructor: Andrew Banks 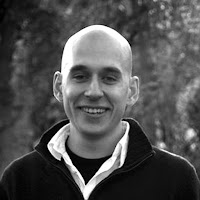 Andrew Banks is an artist and freelance illustrator. Andrew works with watercolor, pen and ink and graphite and his subject of choice is architecture, architectural landscapes and cityscapes. Andrew has always enjoyed sketching, but it wasn’t until a 6 week study trip to Europe in 2008 that his passion for on location sketching solidified. Visiting cities such as Rome, Florence, Venice, Paris, Copenhagen, and Stockholm, he was inspired by the ancient architecture, urban fabric and vibrant city life. For his entire trip, Andrew captured these experiences in his sketchbooks, illustrating and telling the stories of architecture, and the sights, sounds and smells of each location. 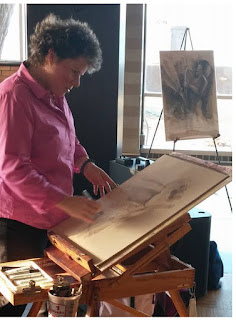 Lisa Flahive is most widely known for her expressive drawings and watercolors of jazz musicians, created live, in the moment, on the bandstand. This allows her to improvise, react, and communicate with the musicians. She chooses watermedia because it reflects the life of the music and must be created boldly, in the moment. Lisa paints what inspires her, such as cafes or chefs in the kitchen. She also loves to capture the energy of a city in her vibrant street scenes, and paints many en plein air, at night. Lisa is the artist in residence for Chateau Chantal Winery in Traverse City, MI and paints live on the bandstand every Thursday during their popular Jazz at Sunset series. 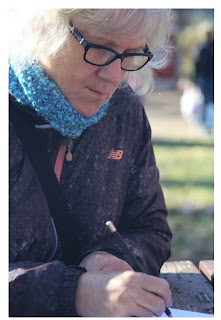 An Urban Sketchers-Chicago member since June 2014. Peggy’s education includes a BFA-painting and drawing, a certificate in mechanical drafting. Work and courses in landscape design and landscape architecture have strongly influenced the development of this class “Team Sketching” to explore merging scale drawing techniques and individual drawing styles to create a mosaic site illustration.
Posted by BARBARA WEEKS at 2:04 PM 2 comments:

Whether you're telling a little story, a medium tale, or an epic in your sketches, add to your visual vocabulary with our 10 talented instructors in our "10Years 10 Classes" program. Sharpen your pencils and sharpen your skills while you celebrate the 10th anniversary of Urban Sketchers.

Meet Our Next Group of Instructors 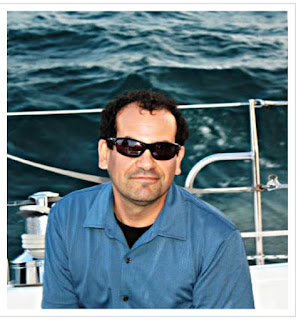 For Joel, clear and fast sketching has been a factor in the success of his design work and architectural practice. Joel is on the Executive Board of Urban Sketchers, and is active in the Chicago chapter. In addition to running a successful practice, Joel has taught architectural sketching at the Art Institute of Chicago (1997), Columbia College School of Interior Architecture (1997-2004), the Chicago Architecture Foundation Adult Education Program (2005-2011), Urban Sketchers Chicago (2014-2016), The Ontario Association of Architects (2013-2017), The Royal Architectural Institute of Canada (2017), and for the United States National Endowment for the Humanities/Chicago Architecture Foundation Urban Gateways Program (2009-2013). 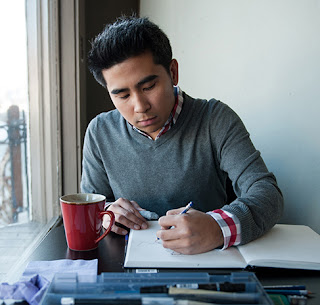 Jingo de la Rosa is a commercial illustrator, urban sketcher and art educator. He has been illustrating professionally since 2011, having been an in-house artist for a major publishing company. In 2013, he decided to take the jump and go the freelance route! Since then, he has worked with world-renowned organizations such as Duncan Toys, the Houston Symphony and Eli Lilly & Co, among others.

Jingo is the host for DRAWN, a bimonthly sketch night and live performance event that serves local Indianapolis artists, art students and hobbyists. 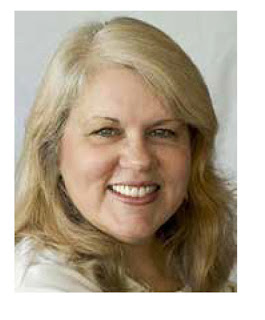 Joann Sondy is a career graphic designer and communicator with a specialty in presentation and publications. In 2016, she launched ArchiSketch Chicago workshops which combine her passions for storytelling and architecture.

A docent with Chicago Architecture Foundation since 2012, Joann leads tours through downtown Chicago with a preference for late 19th to mid-20th century buildings. An accomplished storyteller, Joann is fueled by her advanced Toastmaster skills. Her special interests are Chicago history and sketching architecture, focusing on details such as hand-crafted ornamentation.

Meet the Instructors for Great Stories: The Big Picture


Look for updates and information about 10 Years 10 Classes in Chicago here: