Start the New Year on the Right Foot! Sketching! 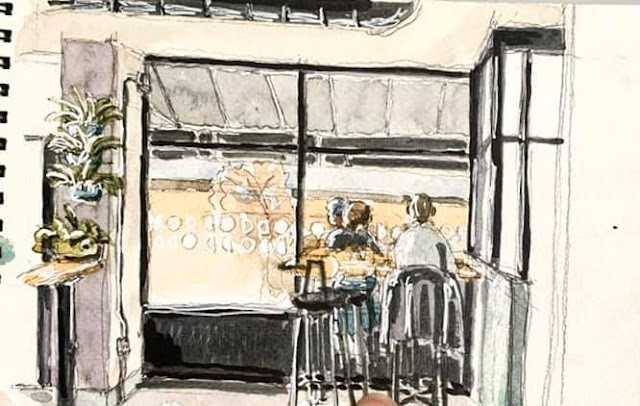 Come ring in the New Year, celebrate the beginning of a creative year at the newly expanded Sketchbook Brewing Company in SE Evanston. They have large tables, beer, and Kombucha. It is bring your own food. Please go to their website to find out more information on this cool location. This is a business so it is appreciated if you make a purchase, however they are thrilled to host us and is not expected. It is easy to get to, located right across the street from the Main St. Purple CTA Line and the Union Pacific Metra train. There is ample street parking and free 3 hr. retail parking one block south behind Hoosier Mamma Pie company – which is also a great place to sketch if you want to make a day outing. Mark your calendar!

Thanks Mary Jo Ernst for the sketch and for setting this up!


New blog posts will be mentioned in the Facebook group but if you’d like to keep up to date by email just fill in your email address in the place provided in the upper right corner under the banner. We look forward to hearing from you.
Posted by BARBARA WEEKS at 1:50 PM 1 comment: 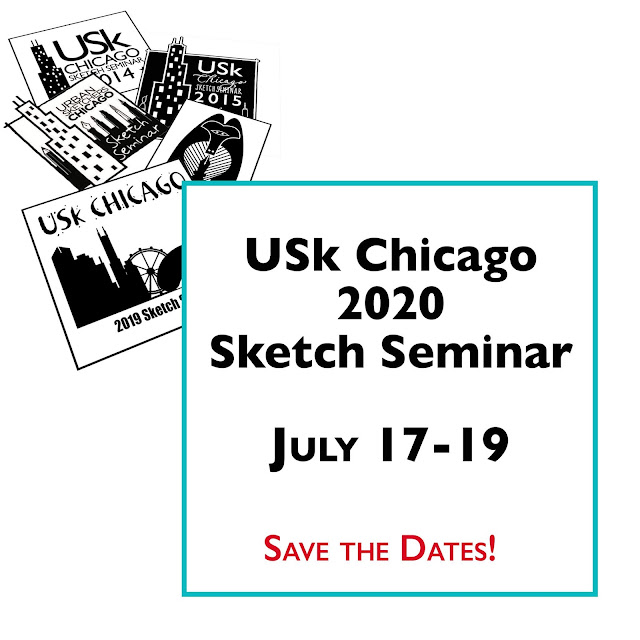 Usk Chicago is excited to announce our Sketch Seminar 2020!

July 17-19 2020 we're returning to the historic and friendly Palette & Chisel! We've teamed with them for our seminars before with great success and are looking forward to heading back there again. 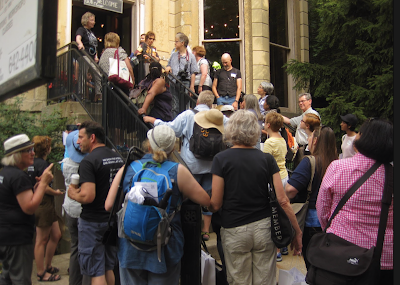 There are several ways to keep up with Seminar 2020 announcements and information:
Or do all three!

Save the date and keep an eye out for the latest news!

The new blog posts will be mentioned in the Facebook group but if you’d like to keep up to date by email just fill in your email address in the place provided in the upper right corner under the banner. We look forward to hearing from you.
Posted by BARBARA WEEKS at 2:59 PM No comments:

Posted by BARBARA WEEKS at 3:48 PM No comments:

A Great Place to Sketch! 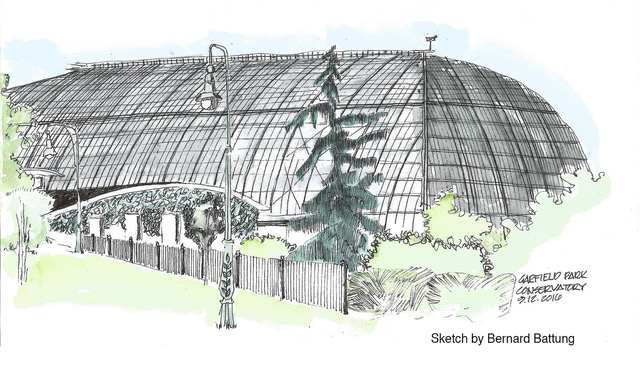 Join USk Chicago to sketch at the Garfield Park Conservatory.  Look for the massive greenhouse building just North of Lake St. on the West side of the street. We’ll meet at the front entrance at noon.


The new blog posts will be mentioned in the Facebook group but if you’d like to keep up to date by email just fill in your email address in the place provided in the upper right corner under the banner. We look forward to hearing from you.
Posted by BARBARA WEEKS at 2:06 PM No comments: 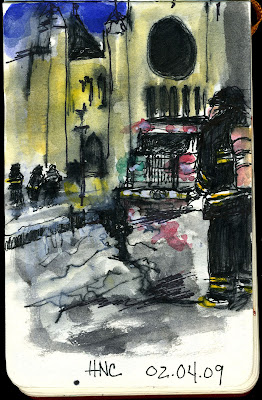 I thought I would have time to sketch during Open House Chicago!

This is my sketch of Holy Name Cathedral done early in the morning on February 4, 2009, when with out the brave Chicago First Responders the Cathedral would have burned to the ground. I told this story many times OHC2019 weekend.

Over 1,000 people toured Holy Name Catherdral  durintg this year’s open house. We docents barely had a chance to sit let alone sketch! It was well worth it however.

Sharing a part of our beautiful city is always a joy to me whether it’s done by sketching or through words.

Enjoy a selection of sketches from USk Chicago members who sketched their explorations during Open House Chicago. 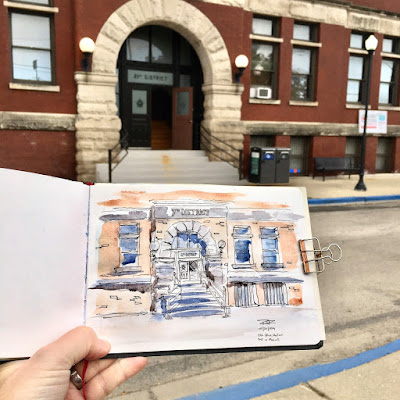 
This station has been in many TV shows.
It might be most famous for a few scenes from Hill Street Blues (early 80's).


A guided tour took us thru the lobby, holding cells, and gun range. I sketched outside, just as the arctic air rolled in from the lake." 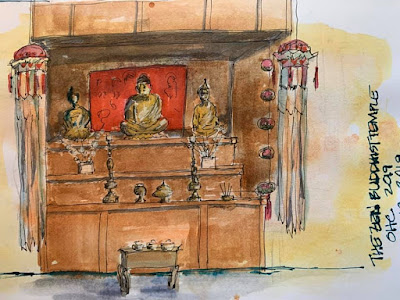 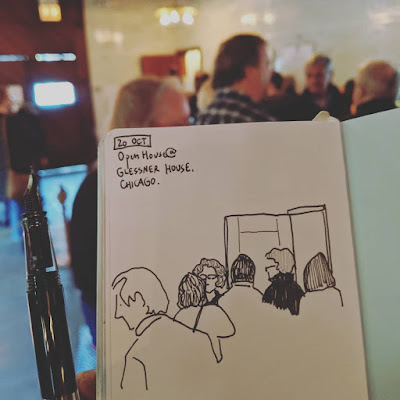 
In line at the #glessnerhouse. 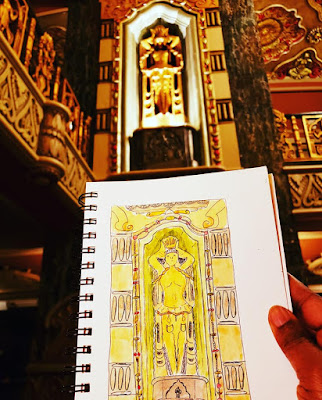 “Couldn’t pass up the opportunity to go on a #sketch crawl during the Chicago Architecture Center open house at several historic #chicago landmark theaters and buildings. 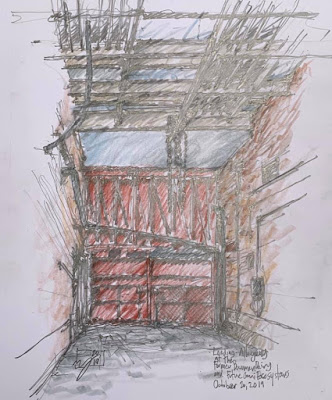 "Had the pleasure to get a tour of the former warehouse and distribution site of Bowman Dairy, one of the largest dairy suppliers in Chicago the late 1800’s up to 1966, located at State Street and Root Street in Chicago. Omni Ecosystems has begun a renovation to make it their headquarters. This is a sketch of the doors at the Root Street loading way that separated two of the buildings. Color pencil and Blackwing graphite pencils in a Kohinoor Bristol Smooth Sketchbook." 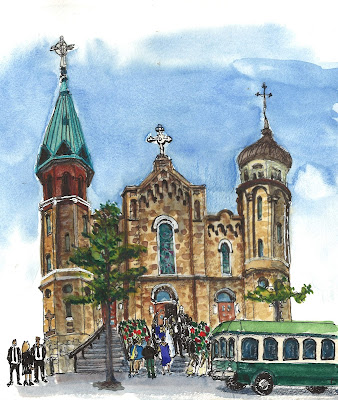 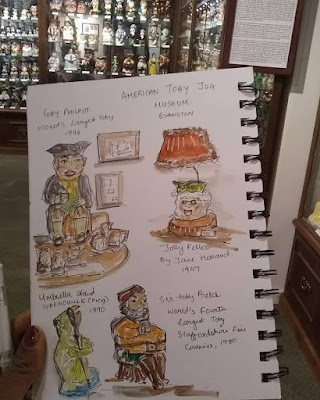 "I chose to sketch at the @americantobyjugmuseum as a part of Open house Chicago 2019 @chiarchitecture They have a wide and great collection of Toby jugs. It is truly a hidden treasure and a must visit." 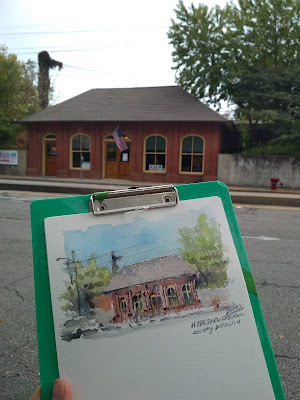 Hyde Park "Moving to the next point of interest!"

It was a great weekend. Thank you for sharing your sketches!


If you were out there sketching Chicago and it’s neighborhoods as part of Open House Chicago and would like to share your sketches post them in the comments. We’d all love to see them!

The new blog posts will be mentioned in the Facebook group but if you’d like to keep up to date by email just fill in your email address in the place provided in the upper right corner under the banner. We look forward to hearing from you. 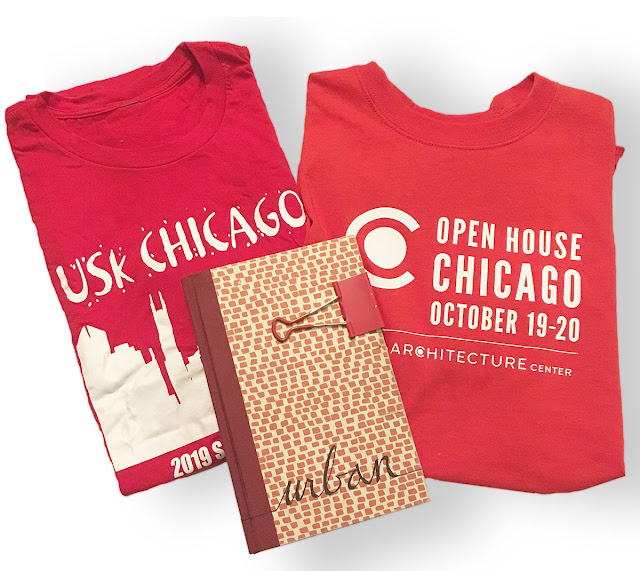 This weekend we have an incredible opportunity to explore Chicago and sketch in 350 iconic Chicago architecture treasures downtown and in Chicagoland neighborhoods. USk Chicago is encouraging you all to get together in small groups and visit your favorite Chicago treasure or explore a new one. Click here for site information.

I'll be at Holy Name Cathedral wearing a different hat, or tee shirt in this case, welcoming visitors to that Chicago historic landmark. I hope to get little sketching in, too. If you stop in at HNC be sure to say hi!

Don't forget to use the hash tag #USkChicagoOHC so we can see and share your sketches, a virtual sketch throw down! If you prefer not to post your sketches but would like us to share them for you, email them to me at urbansketcherschicago@gmail.com.

Open for Your Sketching Pleasure! 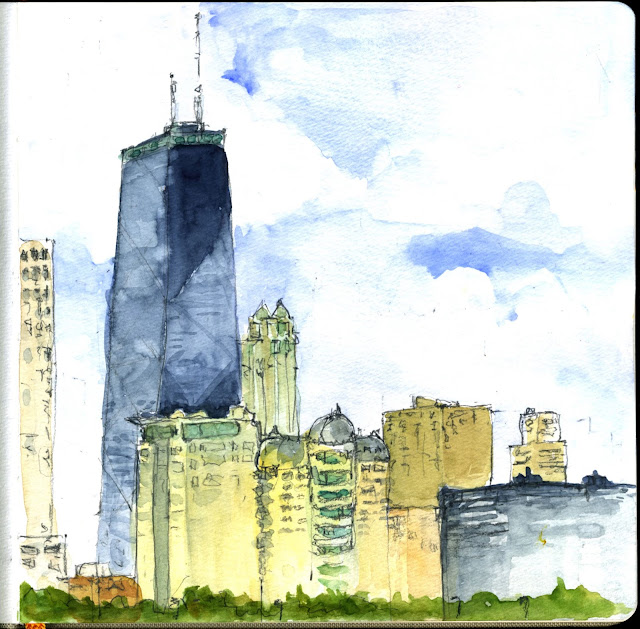 Sponsored by the Chicago Architecture Center, Open House Chicago will take place on October 19-20. It’s an exciting opportunity to visit 350 iconic Chicago architecture treasures downtown and through out Chicagoland neighborhoods. It’s a free event where you can explore these gems inside and out! It’s also the weekend of our regular monthly sketch meet.

What to do? Where to go? What ever you want!

Here’s the plan- We are encouraging you to organize your own small groups to tour and sketch together! It can be downtown or in the neighborhoods. Click here for site locations. If you’re willing to host a small group either downtown or in your neighborhood reply to this post and we’ll help you set it up.
Let’s be sure to use #USkChicagoOHC so we can see and share your adventures.
Posted by BARBARA WEEKS at 12:30 PM No comments: