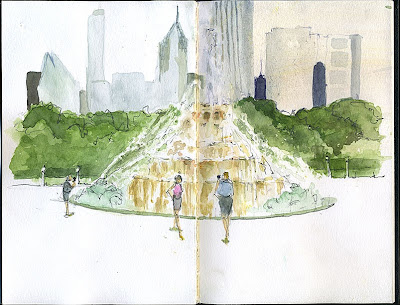 Buckingham Fountain: It was hot and hazy afternoon at Buckingham Fountain. I'll bet it was 90+°. There was one little spot of shade by a concession stand and it was just that - only a spot but it was enough! A large lemonade, a sketchbook and a few sketching friends made for a nice afternoon despite the heat.
(I have no clue what happened to the upper right hand  corner of the scan.) 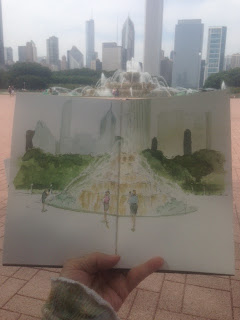 Sunday, I went sketching with the Urban Sketchers Chicago group.  It was really wonderful to meet some sketchers I had not met before.  We revisited Chinatown, where we had sketched last year.  We are thinking this should be a yearly event.
I arrived early (really?), so while I waited for the others to appear, I did a few sketches, sitting on Cermak Road, facing north.  The first sketch is a portion of the Three Happiness Restaurant, and the view up Wentworth Avenue.

Next, I sketched people who were passing by or standing around.  I loved the young woman who was listening to a tour group leader giving a lecture.  The young woman kept fidgeting her legs around, while keeping her arms crossed.  Even from across the street, it was obvious that she was bored out of her mind!

The next two sketches were done at Chinatown Square, a block or two north of Cermak Road, on the west side of Wentworth Avenue.  We were happy to discover that there was a Chinatown Festival happening – and it was very festive!  We were entertained with music, young children dancing, many different people and even a procession of monks.  I set up my little, bum-numbing stool, and began to draw.
When I finished the drawing of the horse sculpture, I acquired a small fan club – two young girls, around 10 and 11 years old, and their twin cousins, the most adorable four-year-old boys.  The older girl asked me to draw Angry Birds.  (I had to use my phone to find an Angry Bird to draw – the red one, of course!)  Then the boys had to have Angry Birds as well.  One of the boys asked me to draw a big house.  (The house I drew could only have been inhabited with stick figures!)  While I was drawing and looking down at the paper, one of the boys kept putting his face under mine, bringing our foreheads together, and staring into my eyes.  I’m not sure what that was about!  Then the younger girl asked me to draw flowers.  I drew everything and gave them the pictures.  They hung around for about an hour – a very appreciative audience – and I enjoyed it immensely!

I copied the symbol for “horse” from the base of the sculpture.  Then, the oldest member of my fan club asked if she could draw the “new” symbol on my page.  I was delighted with that!  All in all, a great day with the Urban Sketchers!

Posted by Mary Lanigan Russo at 10:11 AM No comments: 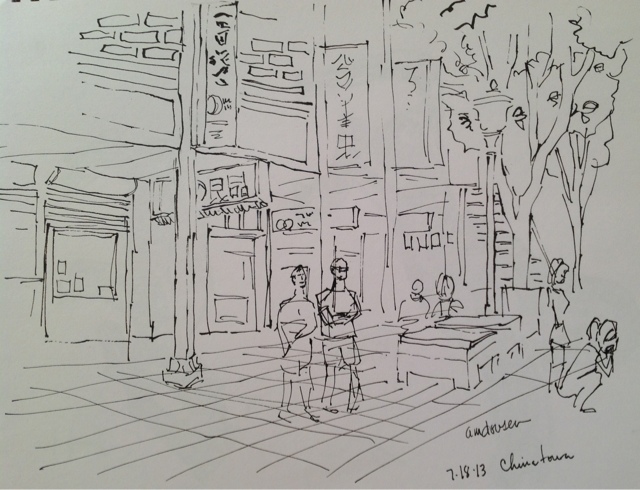 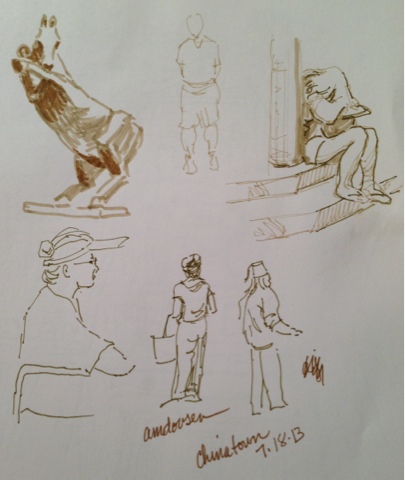 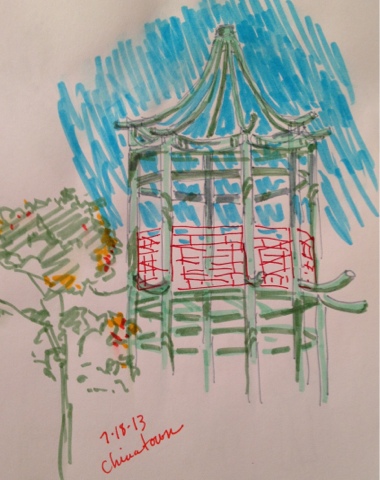 I have driven by this park with this gorgeous gnarled tree for years vowing to go sketch the tree one day. Well, Saturday was the day. I used copic markers and pastel pencil. 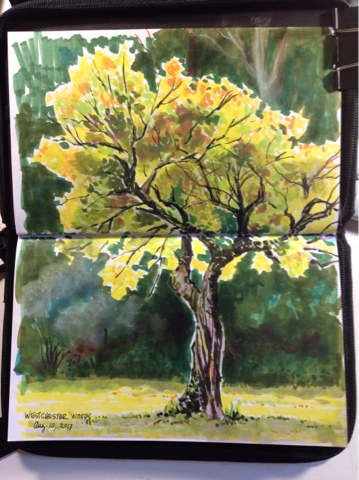