Spotlight Sunday is series of interviews designed to introduce and highlight Chicago Urban Sketchers individually. Now that our chapter has reached nearly 500 members it has become more of a challenge to meet every member in person and have a conversation. These posts concentrate on individuals and speak in their own words and sketches. 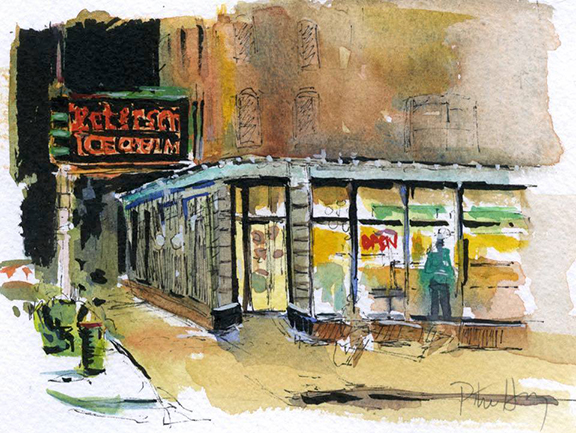 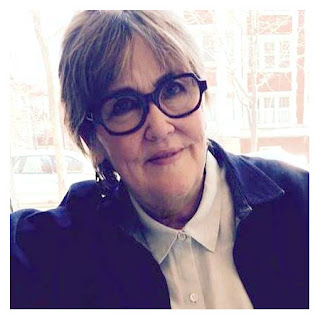 Barbara Weeks: Welcome Ginny! Thank you for letting us shine the spotlight on you!
Let’s start with your telling us a little bit about yourself and how you discovered your love of art.


Ginny Pitre-Hay: My first memory of art was as a child watching my mother draw a ballerina and an angel. It was mesmerizing watching these figures appear out of nowhere—pure magic. Not surprisingly I studied art in college, graduating with a BFA from the University of Texas in Austin. My subsequent career as a graphic designer allowed me to pursue my passion for art “magic”. However, it was a three-year sojourn to Southern California that introduced me to the art of plein air painting and sketching. Sketching has since become a regular part of my life.

Barbara: What prompted you to join USk Chicago?

Ginny: A friend told me about the Urban sketching movement, connecting me to both the book ”The Art of Urban Sketching” and the Facebook group. This path led me to Chicago group. I love seeing the unique ways in which artists interpret their surroundings. We have our own urban sketching group here in Oak Park that goes out early Saturday mornings to sketch around town. Ted Gordon, an urban sketcher, started the group “In Art Pursuit”, on Facebook. It’s open to anyone who wants to join us.

Barbara: I think there are as many reasons to sketch as there are sketchers. Why do you sketch?

Ginny: I sketch to conjure the magic of images appearing on paper. I also love the tactile feel of the pencil, pen, or brush as it moves across the surface. Images reveal stories and I love a good story –particularly a good visual story. Parks, architecture, and the random gathering of people in a busy city are just waiting to be captured and wrangled onto a sheet of paper.

Barbara: There is something about the feel of the pencil on paper or the paint and water flowing together that draws me (no pun intended) to sketching, too.
Do you have a favorite sketching medium?

Ginny: I usually keep it really simple. My go-to medium is ink, usually micron pens, a brush pen and a small travel set of Winsor Newton watercolors. I am increasingly experimenting with new papers, colored pencils, markers, and occasionally pastels. It is an ongoing process of exploration.

Ginny: Drawing people. I am attracted to the fluid gestures of people in groups as they interact with one another, or the individuals deep in their own private world. They fascinate me with their untold stories. Increasingly though, I am drawn to buildings and cityscapes with their repeating patterns, varying shapes and groupings, with an added advantage—architecture doesn’t squirm or abruptly get up and leave.

Barbara: If you could sketch anywhere in the world where would that be?

Ginny: Cuba is on my radar—to immerse myself into the culture, the old and the new, sketch the people, the architecture and, of course, the vintage cars.

Barbara: What an opportunity that would be! Is there an artist that has had a great influence on your work?

Ginny: The drawings, especially the figure sketches of Leonardo DaVinci, and both the art and drawings of David Hockney and Ben Shahn.

Barbara: Ben Shahn is one of my favorites, too! His book The Shape of Content is outstanding!
Is there a sketch you are most proud of?

Ginny: My sketch of San Marco Basilica in Venice. It was the first time I sketched such an architectural behemoth. I dove right in with ink and was pleased with my attempt. 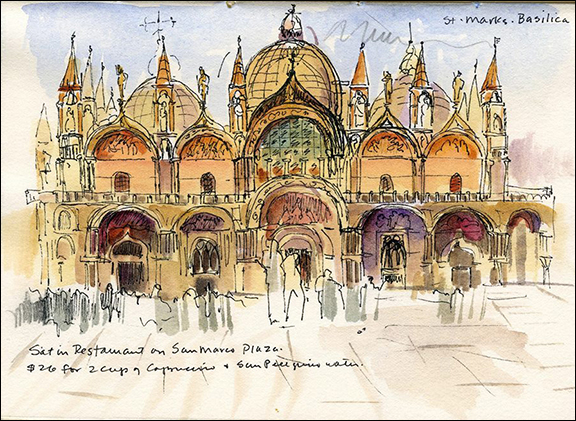 Barbara: Do you have some tips to share on sketching on location?

Ginny: Pack lightly. Take some time looking around before deciding where to set up. Sometimes the best view is behind you. A simple viewfinder is helpful in framing up a scene. Bring a small seat/chair for a long sketch, as handy benches are rarely nearby. In the city, scout the scene and beware of bus stops or loading zones, which can later seriously block your view. When I first started out, I trusted a 15-minute loading zone. Ha! Early morning and late afternoon have the best shadows that add drama and definition to a scene. As for onlookers interested in your painting, embrace the children. They love the magic of what you are doing no matter how good or bad the sketches.

Barbara: What do you see as the benefits of sketching?

Ginny: I believe that “a sketch is worth a thousand words”. The cave paintings of Lascaux speak to us; no spoken language is required. Sketching regularly keeps my skills sharp and supports my other artistic endeavors. As a graphic designer, sketching is invaluable in rapidly creating multiple solutions to a project. As a painter and sketcher, I often do quick thumbnails of different views of an area before I commit to a scene. I will sometimes use the sketches, or parts of them to develop a larger painting.

Barbara: We know you’re on FaceBook. Do you have a blog or other social media accounts where people can see more of your work?

Ginny: I am on Instagram, just recently, and have a web site—pitrehayart.com

Barbara: Thanks, again, Ginny, for taking the time to chat with us and for sharing your sketches and thoughts with all of us!

Posted by BARBARA WEEKS at 7:00 AM